I’ve always been in awe of The New York Times, so it was thrilling to be interviewed by a Times reporter last Tuesday on New York’s primary day, and even more thrilling to find myself quoted in the next morning’s edition, and to discover that the reporter, Jesse McKinley, topped off his story with the title of my vampire soap opera novel, Hope Dawns Eternal. Here’s the poem I wrote to commemorate the occasion.

The New York Times, that great gray lady, gave me the last words

In the story “Voting at a Gun Club,”

Filed before the presidential primary was even over.

Inside, I’d traipsed the length of the grubby gray cinder-block building

At the Bailey Mountain Fish and Game Club,

Who smirked as I declared my party and signed the Democratic ledger.

They told me to remove the Women for Hillary button

In this Inner Sanctum of democracy.

I blackened my chosen circles, fed my ballot into

The silvery maw of the machine,

Nostalgic for the heavy curtains, the leaden click of levers

Pushed down to reveal the red x’s of my choice.

When it was over, out in the sunlit clearing in the woods,

Approached and asked if I could spare the time to talk.

Over his shoulder, a photographer snapped away

As I stumbled over half-baked opinions,

While my inner critic cursed my lack of originality,

When the questions wound down, I asked what paper he was with,

The New York Times, he said, in a near-apologetic mumble

Like the one I use when I say I’ve gone to Harvard and Columbia.

I told him of my father, managing editor of The Milwaukee Journal

Back in the fifties heyday of McCarthyism. He was suitably impressed.

Almost as an afterthought, I told him I was a novelist,

Rummaged in my purse, handed him a postcard for Hope Dawns Eternal,

That night I binged on TV primary returns, rejoiced for Hillary.

But dubious I’d made the cut. He’d no doubt talked to lots of people,

And I’d said nothing especially quote-worthy,

My ever tech-savvy husband grabbed his cell,

Googled my name and news, and said, “You made it.”

I commandeered the phone, scrolled down,

And there I was at the very end of the article,

When I reached the last lines, I shrieked:

“An amateur novelist, she pressed a pamphlet

For her vampire novel into a reporter’s hand.

He chose it as a closing metaphor, I’m sure,

But to me, such synchronicity feels like a blessing.

I’m not big on higher powers,

But maybe something somewhere is looking out for me

And success is in the stars.

Of course I’ll have to work my butt off,

But I can legitimately say,

“As featured in The New York Times.”

My parents, with their lost, unpublished novels,

I premiered the poem yesterday at my women writers group and last night at POETS SPEAK LOUD, a monthly open mic at McGeary’s Tavern in Albany, where I was featured poet. I got a warm reception both times, and I hope you’ll enjoy it too, regardless of your political persuasion.

Here’s a direct link to the New York Times article:

It’s been two weeks since Michael Easton returned to General Hospital as the mysterious doctor Hamilton Finn—three episodes per week, for a grand total of six, and in half of them he’s been shown shooting up with some mysterious substance from a gigantic syringe. We don’t yet know the contents, but the phases he goes through from craving to semi-stoned satisfaction give him a wonderful opportunity to show off his acting chops, something he couldn’t do as the tightly controlled John McBain and Silas Clay.

Like most fans, I don’t believe he’s shooting up an illicit drug, at least not of the opioid variety, but it could well be something experimental he brought back from his travels in Australia and heaven knows where else, perhaps something derived from his “service lizard,” the bearded dragon Roxy that he’s keeping caged at the Metrocourt hotel.* He’s probably self-medicating in hopes of curing some exotic, potentially fatal disease.

Finn with his “service lizard,” the bearded dragon Roxy.

Fans are loving this latest reincarnation of Michael’s. He’s edgy, temperamental, quick to anger, with a sardonic sense of humor. Friday’s scene, when he was cajoling and shouting at Tracy to wake up following her brain surgery, was marvelous—she may have been near-comatose, virtually at death’s door, but how could she resist such a gorgeous doctor luring her back to life?

For me, this is by far the most fascinating character Michael has played since the late lamented vampire Caleb Morley on Port Charles. He’s already inspiring me to plunge back into Sunlight and Shadow, the sequel to my vampire soap opera novel Hope Dawns Eternal. My enthusiasm had flagged since they killed off Silas Clay last July 31st, which happened to be my birthday. But I’m eager to get back into the adventures of my Jonah McQuarry character, who’s just beginning to embrace his true identity as a vampire, and his lady love Abigail Hastings, who’s hiding more secrets than he can possibly imagine.

What are your theories about Dr. Hannibal Finn? Who is he, really? Why does he want to stay in Port Charles, and what characters will he become involved with? Wouldn’t it be wonderful if through his “service lizard,” he’s seeking a magical elixir that will give him eternal life? Then he’d be sure to stick around awhile.

*Thanks to Alison Armstrong for researching bearded dragons and posting an article from an Australian museum that states: “Recent research has indicated that Bearded Dragons possess primitive venom glands, the use of venom in dragon lizards is not yet understood, however a bite from this species should pose no long-term ill effect. The bite site should be cleaned with a mild disinfectant, as with any animal bite.” They rarely bite, however, but they do puff up their bodies, including the “beards” under their jaws, to appear more formidable to potential aggressors.

Please visit me at http://www.Amazon.com. Just type Julie Lomoe into the search box and all three of my books will come up: Hope Dawns Eternal, Mood Swing: The Bipolar Murders, and Eldercide. I could really use some sales! 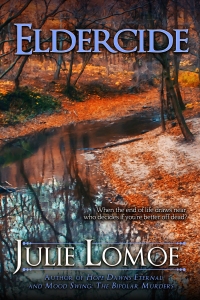 At long last, my novel Eldercide is available on Kindle, and you’ll soon be able to buy a printed copy and other e-pub versions as well. I first published the novel in 2008, but it’s as timely as ever. Here’s what I wrote for the 4000-character description that people will see when they bring up the book on Amazon. If you have any comments or suggestions, I’d love to hear them. Does this promo tempt you to buy the book?

When quality of life declines with age and illness, who decides if you’re better off dead? Nursing supervisor Claire Lindstrom suspects a killer is making the final judgment call for the clients of Compassionate Care.

A woman with Alzheimer’s disease dies unexpectedly in the night. Another is found dead beside a stream. Claire sees the beginnings of a sinister pattern, but Paula Rhodes, her temperamental boss, doesn’t want her raising questions. The survival of the home health care agency in upstate New York depends on its reputation for quality care, and a rash of mysterious deaths could kill the business.

Claire antagonizes the county coroner and becomes the prime suspect in the eyes of the police. All the while, from his vantage point near her cottage on Kooperskill Lake, a killer called Gabriel is watching, channeling his obsession with Claire into passionate paintings. Under another name, he’s a man she already knows – but which one? And is he part of a far larger scheme of Eldercide, taking orders from a shadowy organization?

Author Julie Lomoe knows home health care from the ground up. After working as a creative arts therapist in a psychiatric hospital for over a decade, she founded ElderSource, Inc., a Licensed Home Care Services Agency in upstate New York. As President and chief administrator, she handled quality assurance, human resources and marketing, while a nursing supervisor was responsible for patient care. A Registered Art Therapist and counselor with training in family therapy, Julie couldn’t legally provide hands-on care, so she became trained and certified as a Personal Care Aide. Filling in when other staff couldn’t be found, she learned the business at the most basic level, helping clients cope with their declining bodily functions, comforting Alzheimer’s patients through sleepless nights, waiting impatiently for relief staff to arrive. In the process, she developed enormous respect and empathy for the aides who make home care their life’s work, and Eldercide is dedicated to them.

As a small, start-up business facing stiff competition from established agencies, ElderSource built its reputation and case load with an ever increasing emphasis on round-the-clock live-in care, recruiting many of the aides from New York City. Compared to Compassionate Care, ElderSource had relatively smooth sailing. Some of the agency’s seriously ill clients died during the agency’s watch, but all of natural causes. But as ElderSource grew, so did Julie’s stress. Like Paula Rhodes, she agonized over meeting the payroll and packed on pounds while trying to cope by means of comfort food and antidepressants.

Eventually, realizing the agency could quite literally be the death of her, Julie transferred the staff and clients to another agency, and ElderSource closed its doors. Several years passed before Julie came to terms with the loss and gained the perspective she needed to explore the experience through fiction.

In the years since Julie first published Eldercide, the real-life issues and ethical questions raised in the novel have grown ever more acute. The percentage of elderly in America continues to swell, yet the services to care for them have not kept pace with the need. With less disposable income, working harder and longer to meet basic expenses, people struggle to provide care for their elders, and the tensions and conflicts that tear apart the families in Eldercide are if anything greater than ever.

Our society is rapidly aging, our allotted life spans growing ever longer, but at what cost? Eldercide explores ethical dilemmas most of us will face sooner or later—if we live long enough.

Does this description tempt you to buy the book? If so, why not head over to Amazon right now? Type in my name, Julie Lomoe, and you’ll see Hope Dawns Eternal and Mood Swing: The Bipolar Murders as well as Eldercide. Just think: you could own all three of my published novels for less than $9.00—the price of a fair-to-middling glass of wine. And you’d earn my undying gratitude. If you do decide to click on that shopping cart icon, please let me know so I can thank you personally.

Above is the cover for the original edition of Eldercide. If you see it on Amazon, don’t buy it there! I’m no longer with the original publisher, and I won’t see any of the profits. I’m still fond of the cover illustration, which I did in pastels, but I decided to go with something less terrifying, since the killer in Eldercide is kinder and gentler than he looks here. But if you’d like to buy this version with my original artwork, I still have some around. Just contact me at julielomoe@gmail.com and we’ll work it out.