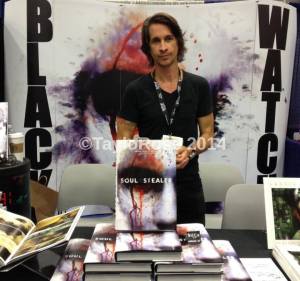 Michael Easton at Comic Con 2015. Thanks to Taylor Rose for permission to use this great photo! 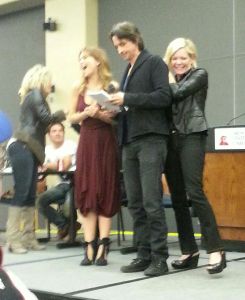 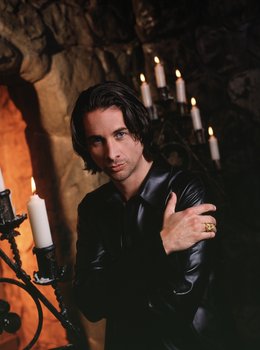 It’s official: Michael Easton is leaving General Hospital. Rumors have been flying recently, but yesterday his departure was confirmed by official sources. Reportedly he wrapped shooting at the end of June and in all probability his character, Dr. Silas Clay, will soon be murdered. I’ve got lots to say, but for now, I’m just going to share a few favorite photos.

Me and Michael at Fan Fantasy day, April 2014

Here I am, reading at McGeary’s

I haven’t been writing much poetry lately, but I love reading at open mics, and I’ve got lots of conflicting feelings about launching my new book, so I wrote this for Poets Speak Loud, the monthly open mic at McGeary’s Tavern in Albany. The applause was music to my ears. My shadow side is set in italics.

Me and My Shadow

HOPE DAWNS ETERNAL! That’s the title of my brand new book, available at last on Amazon. My state of mind is sunny too.

Watch out, Julie. Hope is just one step shy of mania. Trust me, you don’t want to go there.

Small likelihood of that. I haven’t been manic in years.

Oh yeah? You still dream of being a best-selling author, don’t you?

Of course, but this time it’s totally within the realm of possibility. It’s not like the time I thought I’d collaborate with the President of Bard College and Robert Rauschenberg to save the Hudson Valley. A vampire soap opera thriller – how can it possibly miss?

Vampires have been done to death.

There’s nothing new to say about them. Besides, your writing is pedestrian – you’re no Bram Stoker or Anne Rice.

I’m as good as the Twilight author, and a hell of a lot better than that British broad who wrote Fifty Shades of Grey.

Touche. Her writing’s an abomination and her heroine’s an idiot.

Yes, and an insult to liberated women everywhere. But reading trash that terrible gives me hope.

Cling to your pitiful delusions if you must. But soap operas are going the way of the dodo bird – they’re practically extinct.

They still have millions of fans, and that’s my biggest target audience.

Good luck with that – those soap fans don’t read books.

You’re stereotyping a bunch of people you don’t know. Anyway, lots of people don’t read books these days. Even elitist snobs like some of my so-called friends. People who claim to support the arts, but only patronize the artists vetted by the New York Times or the New Yorker. Shell out $11.00 for a friend’s book? Fuggedabout it, as Tony Soprano would say.

Hey, wait a minute, Julie. I’m your shadow side, your Debbie Downer. You’re sounding every bit as negative as me. I thought you were upbeat.

Maybe your cynicism’s catching. Or maybe it’s my Scandinavian heritage – I’m three-quarters Norwegian and one-quarter Swedish. Depression’s in my blood.

Speaking of depression, didn’t you fall into a suicidal funk after your first two books came out and failed to set the world on fire?

Yes, and I can’t afford to fall into that death spiral ever again. That’s why I’m marketing like crazy.

But you hate marketing.

Hate’s too strong a word, and marketing’s a necessary evil. I’ve got to suck it up and grin.

Good luck with that. Anyway, it seems you’re pretty stable all in all.

Maybe that comes with age. Or maybe it’s my meds. Speaking of which, my shrink may be retiring. He wants to work exclusively in nursing homes.

Hmm, that’s interesting. You’re getting up in years, are you not?

So maybe you’ll get lucky and keep the same shrink when you go to a nursing home. By any chance does he work for The Eddy?

Shadow, you’ve got a warped sense of humor.

Practical’s for dullards. I’m way past practical, and just pissed off enough to banish you from my brain. I order you: begone.

In other words, fuck off. 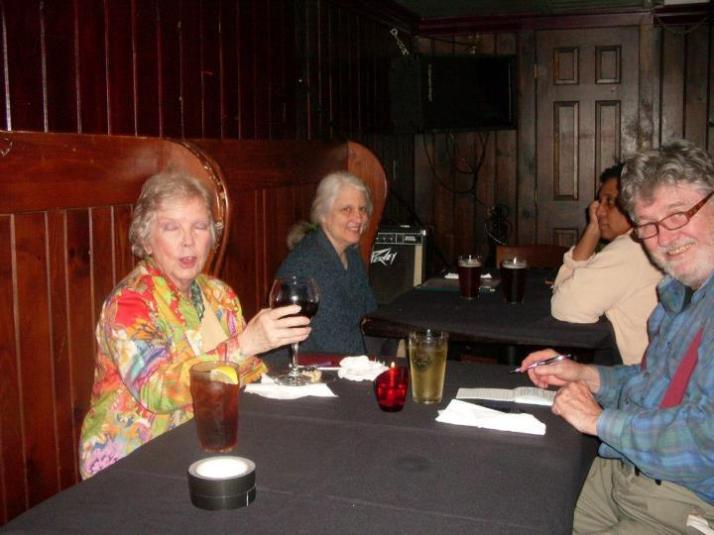 At McGeary’s with my husband, Robb Smith (right)

Hallelujah! I just updated the signature that goes out with my e-mails, and it took me only an hour and a half to figure out how! Mark Coker, CEO of Smashwords, says e-mail signatures are one of the most effective and easiest ways to market your work, but for me, when it comes to internet technology, nothing comes easy.

Lest you think I’m a total ignoramus, I’ve known how to create signatures for ages, but they’ve been tiny and self-effacing, in the plain text that’s standard with Thunderbird. To promote my new book, Hope Dawns Eternal, and let people know it’s for sale on Amazon, I wanted something flashier that will jump out at viewers, and for that, Thunderbird told me I need to use – insert gasps of horror, hyperventilating and pounding heart – HTML code. For the uninitiated, that stands for hypertext markup language.

I’m proud to say I didn’t have an anxiety attack. I’ve come a long way since acute panic made me drop out of a web design course at Hudson Valley Community College a few years back. Instead, I calmly clicked on Thunderbird’s HELP menu, found the information on creating custom signatures, and printed it out for further study. Call me old-fashioned, but for truly assimilating new knowledge, I still prefer paper.

The Thunderbird tutorial took me part of the way, but my signature didn’t look right, so I Googled “HTML code beginners.” That brought up millions of hits, and some further surfing turned up what I needed to know.

Okay, I’m back. Luke Spencer saved one of his sons from a grisly death by defusing a bomb, only to face armed gunmen who – oh, never mind. Michael Easton, my favorite actor on GH, isn’t on this week. They’re concentrating on Luke because the actor who plays him, Anthony Geary, is retiring and moving to Amsterdam, and they want to give him a spectacular send-off. I doubt they’ll kill him, though, because he may get bored and want to come back for a visit.

But I digress. True, Hope Dawns Eternal is about soap operas, but it isn’t about General 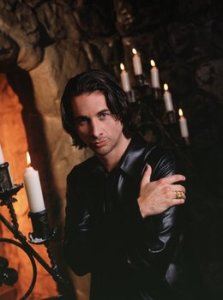 Hospital. The hero, Jonah McQuarry, is a police lieutenant played by the reclusive actor Mark Westgate, who used to play a vampire on a long-gone soap called Oak Bluff. When a talk show host turns up dead, drained of blood, suspicion soon falls on Mark . . . You can learn more by checking out previous posts, or still better, by reading the Prologue and Chapter One right here on this blog. Then, of course, I hope you’ll buy it.

The world of publishing has changed dramatically in the years since I published my two previous books, and indie authors like me have more opportunities than ever before. But the trick lies in learning to harness the infinite power of the Internet, and for technophobes like me, the challenge is daunting. The learning curve is steep, fraught with perils and frustrations, but I’m determined to hang in there and master at least the rudiments of self-publishing.

My cover illustration for the original ELDERCIDE

When I published Eldercide and Mood Swing: The Bipolar Murders, a small firm in Texas handled the formatting and design. They did a beautiful job, and I loved the finished product, but they took a huge percentage of whatever measly sales income I managed to accrue, and my royalty checks were minimal. Though I can probably never prove it, I’m convinced they swindled me out of some earnings.

Now, with the generous royalty arrangements available through Amazon, Smashwords and other distributors, I won’t get fooled again. By summer’s end, Eldercide and Mood Swing will be available in new editions, in a variety of e-book and paperback formats. I’ll be in total control, but the learning curve is less a curve than a raggedy zig zag line. The overall trajectory tends slowly upward, but there are lots of hidden hazards and pitfalls. Often I feel the way all those cops must have felt bushwhacking through the Adirondack woods in search of the killers Matt and Sweat, wary of ambushes and sometimes doubling back on their own tracks.

One example: The design of this blog. Notice how the headers at the top are superimposed on each other like a double exposure? I know exactly when the problem arose; it was when I changed “themes,” as WordPress calls its design templates, from “Misty Look” to “Koi.” While my blog was relatively inactive, I let it go, but recently I spent a couple of hours trying to fix it, in every way I could think of, but to no avail.

Finally I clicked on the WordPress link that says “Contact Us” and arrived at a site called “Happiness Engineers.” There I texted back and forth with a friendly fellow named Amal, who gave me all kinds of hints and suggestions to try. Alas, he couldn’t fix it either, and after a couple of hours, I thanked him for his efforts and signed off. The next day WordPress sent me an email with a questionnaire asking how the experience had been, and I didn’t answer, not wanting to get Amal in trouble.

Learning the rudiments of HTML is another challenge, but I’m hanging in there. I’ve got all summer to fine tune my marketing campaign and expand my online network. For example, once again I’ll be featuring guest bloggers, beginning around Bastille Day – but that’s a topic for another blog. Right now, I’m heading out to enjoy my shade garden and a gin and tonic.