How would you like to be one of the very first to read my vampire soap opera thriller, Hope Dawns Eternal? So far, only my husband has read the entire novel. A few writers have read isolated chapters, or heard me read scenes aloud, but no one else has read it in its entirety.

I’m not looking for critiques or editorial suggestions. I welcome comments, but I’m not going to change anything – not unless someone signs me to a three-book contract and pays me lots of money upfront. My last post about why I don’t want an editor inspired some spirited discussion in some online discussion groups, particularly the one associated with the International Women Writers Guild, but I’m standing my ground for now.

Right now I’m looking for people who will commit to reading the entire manuscript and then writing blurbs or brief reviews that I can use in publicizing Hope Dawns Eternal online. If you’re really speedy, I may be able to quote you in the book itself, because I still haven’t completed the front and back material. I’m envisioning the kind of quotes you see filling the first couple of pages of a trade paperback, comments that tempt the reader to buy.  But you need to get them to me by Sunday, February 22nd, at the latest, because I’m going to send the book off for formatting next Monday. If you miss that deadline, I’d still welcome your comments for future use, but they won’t appear in the book. 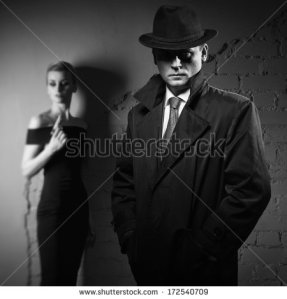 Not my cover but it has the right noirish feel

Of course if you hate the book, you don’t have to write anything at all. But I welcome your opinions anyway – if nothing else, I may take them into account as I begin the next installment. You can even tell me I should have hired an editor! I especially welcome comments from published writers, and I’ll gladly include a book or series title after your name. But if you’re simply a reader, that’s fine too. And I’d love to include quotes from a few soap opera fans, because you’re the audience who will love this book the most.

So how much reading am I talking about? The manuscript stands at 78,318 words. That’s 265 pages double-spaced, typed the way you’d see them fresh out of my printer before formatting. If you’re interested, please e-mail me privately at julielomoe@nycap.rr.com. In addition, please leave a comment on this blog so that I’ll know you’re motivated enough to actually type something!

If you’d rather donate money, that’s great too. Go to www.gofundme.com/gep8ts. Better still, do both! You’ll have my undying appreciation.

UPDATE Saturday, February 21st. Since I published this post two days ago, I’ve changed my strategy. It’s too late to expect you to read or react to anything by Monday, and I’m not going to include blurbs in the first edition, but I’m still looking for readers – especially published writers. There’s no longer a huge rush. But please, if you’re interested, include a paragraph about who you are and why you want to read it, so that I know you’re literate. Also, I may send out just the first couple of chapters. Then, if you like it, I may send more.

Hallelujah! HOPE DAWNS ETERNAL is finally ready to publish, or almost. Yesterday I finished combining the prologue and 36 chapters into one gigantic document of 265 pages and 78,318 words – longer than I’d expected, but an ideal length for the first book of a trilogy. Or who knows, maybe it’ll become a longer series. I feel as if I’ve barely begun to explore all the possibilities in this paranormal soap opera vampire saga.

In countless workshops and articles, I’ve heard the same advice: get an editor. I’ve always disregarded it, convinced I’m my own best editor. This time my husband, who has extensive professional experience in publishing, gave my final draft a careful read-through, and he found relatively few things that needed changing. Even so, it’s amazing how many nit-picky things I’ve found to research even after I thought I was finished. 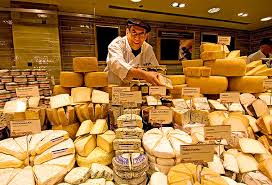 The names of cheeses, for example – how do you know which to capitalize? Swiss cheese, with its many holes, is a no brainer, but how about Brie or Stilton? Yes, they’re capitalized because they’re named for specific locations where they originated, but it takes some Googling to find out which are actual place names. Some are capitalized because they’re domain-protected, like Parmigiano-Reggiano, which can only be made in those specific cities. We don’t capitalize ricotta, though, because the name simply means “recooked.”

And what about hats? I had my hero hunkered down in a cab, with a fedora 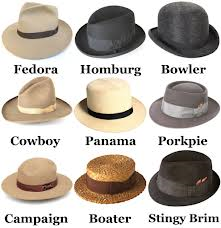 pulled down low to hide his face, but I thought I’d better check to be sure that was actually the correct word for the hat I was visualizing. Turns out I was right. Picture Bogart, Sinatra or the film noir heroes and villains of countless 40’s movies – they’re all wearing fedoras. But in the course of my research, I learned all about porkpies and homburgs too.

Then there are new-fangled terms like showrunner. It’s the trendy term for the head honchos/creators/auteurs of TV series, like David Chase of The Sopranos  and Vince Gilligan of Breaking Bad.* But is it one word or two? When I was working on my first draft two years ago, Word’s Spellcheck underlined showrunner with that squiggly red line every time I used it, but now the powers-that-be at Microsoft have decided it’s a genuine word, and the red squiggle is no more. In the new Vanity Fair, however, Beau Willimon, the creator of the Netflix series House of Cards, is described as a hyphenated “show-runner.”

Consistency is the key – that’s why publishers and periodicals have style guides, and they don’t always agree. In my personal style manual, showrunner is one word, but I found a couple of instances where I’d made it two, so I changed them. And I’m ultra-cautious with the “find” and “replace” functions, which can lead to weird consequences. For example, I had a villainous character named “Nick,” and I changed him to “Mick.” My husband caught the line where I said something happened “in the Mick of time.”

But these are just copy editing issues. Then of course there’s the over-all flow of the story line, the characters – I could go on and on about that kind of editing, but I’ve said enough for one post. I’ve done my damnedest to make this novel the very best it can be. That’s not to say it couldn’t be better, but I’m not changing a word. If some agent or publisher wants to take it on and offers me a gazillion dollars upfront, I may reconsider. Until then, for better or worse, Hope Dawns Eternal is a fait accompli, and I’m ready to send it out into the world. With any luck, it will be available by the end of February. Then it’s on to the sequel!

*Brett Martin’s book Difficult Men (Penguin, 2013) is a fascinating behind-the-scenes look at the evolution of modern series like The Sopranos, Mad Men and Breaking Bad.

P.S. I still haven’t found my illustrator and designer, and I need money to hire good ones. Please help by donating to me at www.gofundme.com/gep8ts. Every little bit helps, and I’m offering prizes. I may even name a character after you!