Those Baptists sure know how to throw a fine funeral! Along with millions of others around the world, I watched Whitney Houston’s service at the New Hope Baptist Church in Newark last weekend on CNN. Expecting to catch an hour or so, I found myself transfixed, and four hours flew by in a flash.

“We’re taking you to church,” one of the many reverends said early on, and indeed they did, for a blend of music, eulogies and preaching that was surprisingly uplifting and even joyful. It brought back memories of the funeral I attended at a black Baptist church in Poughkeepsie in the 1980’s, still the most inspiring I’ve ever attended. Like Whitney’s, it was a blend of sadness and exaltation, rocked by a marvelous choir. The program called it a “Coming Home Celebration.”

The service was for Sherwood Thompson, the Chief Recreation Therapist at Hudson River Psychiatric Center, where I worked as an art therapist, or as New York civil service chose to call it, a “Recreation Therapist (Art).” The hospital is closed now, but back then it had a flourishing creative arts therapies department that included dance and music therapists. Thompson was a former college football player with a B.A., and with our master’s degrees and our lofty artistic proclivities, we never stopped hassling him, proclaiming that we shouldn’t be supervised by a jock and agitating for our own department. Fresh from two decades as a freewheeling artist in Manhattan’s SoHo district, I had absolutely no sense of organizational teamwork or decorum, and fired off frequent inflammatory memos of complaint to the hospital director. 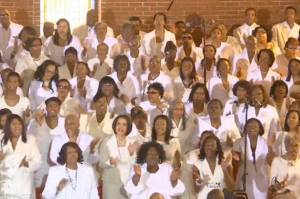 Amazingly, Thompson never fired me. Instead, he was unfailingly gracious, saying that for staff, he’d rather have “racehorses I need to rein in rather than mules I have to kick in the behind.” Eventually we reached a truce of sorts, and when he died from complications of diabetes, a dance therapist and I attended his service. We were among a couple of dozen whites in a church packed with hundreds of black people, and we sobbed uncontrollably. The magnificent choir and stirring rhetoric fueled and stoked our emotions, and it was a cathartic experience even though we didn’t buy into all the Jesus and God talk.

So it was at the Whitney Houston memorial service. The passion poured loud and clear through my small-screen TV into my living room, and the choir and gospel singing were transcendent, even though I couldn’t buy into the notion that Whitney is now singing amidst a choir of heavenly angels.

As a Unitarian Universalist, I’m a little envious of those whose faith gives them such a firm foundation for coping with loss and grief, not to mention the expectation of a blissful life after death. I envision our denomination as being like a gigantic whole wheat donut or bagel – full of bran, raisins, fiber and lots of other wholesome and nourishing ingredients. But smack dab in the middle, where there should be spiritual inspiration, there’s nothing but a hole.

Nonetheless, FUUSA, the First Unitarian Universalist Society of Albany, has a choir, and last fall I joined it. Although I’m a lifelong music lover and play jazz and pop piano, never in my life had I sung in a choir before, perhaps because I’ve always been more of a rugged individualist. But joining a choir was an inexpensive item on my bucket list, so I thought I’d give it a try. It’s a greater challenge than I expected – I sing alto, which is a lot like second fiddle. My sight reading’s rusty, and the melodic lines can be subtle and surprisingly tricky, but the choir director says I’m doing “more than okay,” which is praise enough, so I’m hanging in there.

I haven’t yet experienced the state of transcendent togetherness so evident in good Baptist choirs, but there’s always hope. Matt Edwards, our choir director, grew up in New Orleans, and under his tutelage our lily-white choir has finally learned to clap on the after beat. Once in a while, though it’s generally frowned on in UU circles, we even sing about heaven and Jesus.

Watching six straight hours of Project Runway reruns? Lounging in bed reading a mystery until two in the afternoon? Why the hell not? Now, in the dawn of my eighth decade of life, haven’t I earned the right to kick back and be as lazy as I like? Maybe, but if so, why do I feel so guilty about it?

Yes, ashamed as I am to admit it, I’ve indulged in these wretched excesses in the past few days. Even worse, I still haven’t kicked my Spider solitaire addiction. And today I managed to get to my Nia class at the YMCA, but I copped out of doing the weight machines. After Nia, I generally take a snack break in the Y’s lobby perusing magazines others have donated that I normally wouldn’t buy, like Vogue and Entertainment Weekly, before heading for the weight circuit, but today I simply stashed the magazines back in their rack and split for home.

The Y used to have a  computerized Fit Linx system that tracked exactly how much weight I lifted during each session as well as my cumulative total, which added up to several million pounds over the past few years. But they took away the Fit Linx. Now it’s as if Big Brother has abandoned me, and there’s nothing and no one to track whether I do the machines or not. So why bother?

In part, I’d persisted with the weight machines to condition my body for skiing, but I’ve become a slacker in that department too. Back in December, when cold winds began sweeping down from the north, I thought how much more frozen I’d feel skidding down a windswept mountain and decided that maybe it was time to give up skiing, at least the downhill variety. For now, this weirdly warm and snowless winter has made that a moot point, but even if Lady Gaia favors us with tons of white powder, I suspect I’ll stay cozily hunkered down in my recliner rather than hitting the slopes.

I could regale you with other fascinating details of my descent into senior sloth – the crossword puzzles and movie matinees, for example, not to mention my favorite soap opera. Since One Life to Live was cancelled last month, I’ve gone cold turkey on that one, but Michael Easton, my favorite soap star, will be bringing his Detective John McBain character to General Hospital next month, so alas, I’ll probably relapse.

One problem with writing about all these mundane details of daily life is that they’re boring. But even worse, they’re sins of omission rather than commission, of passivity rather than active engagement in life. According to the experts, staying mentally and physically active while aging probably lengthens longevity, but by how much? And in the long run, does it really matter?

When I engage in these “What’s it all about?” ruminations, my husband frequently reminds me that the universe doesn’t give one whit what we do with our lives. So should we follow Joseph Campbell’s advice and just follow our bliss? And can bliss lie lurking within such ordinary slothful pleasures? For me, probably not in the long run. My most blissful moments come from creativity.

But for others, who’s to say? And who am I to pass judgment?

Should I be ashamed of my tendencies toward senior sloth, or is it OK to silence my inner critic and indulge in periods of vegging out? Any thoughts on the subject? I’d love to hear from you.

Okay, it’s true confessions time – I frittered away the first month of the New Year. But maybe Groundhog Day is the perfect holiday for making those resolutions I never got around to a month ago. February 2nd is appropriately amorphous and a bit confusing – I can never seem to remember what it means when the groundhog sees his shadow, or not, as the case may be. And today I learned, to my dismay, that it’s all a hoax anyway.

Apparently the folks in Punxsutawney, Pennsylvania, decide ahead of time whether Groundhog Phil will see his shadow or not – the rodent’s actual behavior on February 2nd has nothing to do with it. The Groundhog Club’s Inner Circle meets ahead of time in tuxedos and top hats to predict the verdict, so the fix is in. Regardless, they say, Phil is never wrong, because there will always be more winter somewhere.* (Somehow this scenario brings today’s political landscape to mind, but that’s another story.)

Today, apparently Phil saw his shadow, thus predicting six more weeks of winter, whereas his rivals, including General Beauregard Lee at the Yellow River Game Ranch near Atlanta, predicted an early spring. (I watched the Georgia festivities on YouTube. The General evidently lives in a Southern-style mini-mansion, but he didn’t venture outside. If you were an animal on a game farm, you probably wouldn’t either.)

Of course the Bill Murray film Groundhog Day comes to mind. He’s fated to live the same day over and over ad nauseam, and that’s what I feel I’ve been doing for the past year or so, suspended in the limbo of a dreary gray time warp. It’s like flying in a jet through an endless cloud bank and losing all sense of direction or momentum. Unfortunately I don’t believe there’s any pilot at the controls, and I have no idea how to work the navigational system.

But that’s the kind of depressive drivel I’ve vowed to leave behind in this upcoming year. I rather like the airplane metaphor, but I could donate it to one of the characters in Death Denied, the novel I started last November during National Novel Writing Month. On the whole, I’ve been feeling a lot better, so much so that I decided (with the agreement of my shrink) to cut back by a third on my Zoloft. I’m feeling more energized already, so we’ll see . . .

My trusty old computer crashed disastrously a month ago today, contributing in a major way to my January doldrums. We managed to recover most of the data, but the machine is still under the weather and perhaps terminally ill. So I’ve switched to the laptop my husband has been urging me to try for ages. There are quite a few changes I need to get used to, but I’m actually beginning to prefer it. One feature that could turn out to be a pro or a con: the most comfortable place I’ve found for using it, in terms of posture, back support and keyboard usability, happens to be my bed. My cat Lunesta seems to agree – she’s curled up cozily atop my legs and purring.

And now for the next big hurdle: can I figure out how to post this blog entry? If so, then maybe I’ll finally feel empowered enough to confront getting my books up on Kindle by the end of February. Yes, I can!