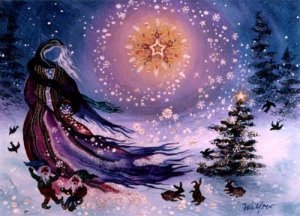 Here’s wishing each and every one of you a wonderful Winter Solstice. Winter arrives officially this evening at 6:38 p.m. Eastern Standard Time, and it’s the darkest day of the year.  For me, the Solstice holds nearly as much emotional significance as Christmas, because from this day forward, things will begin to lighten up again. The change will be almost imperceptible, just a minute or so per day, but from here on out, we’re spinning steadily toward spring.

Centuries before Christianity, let alone Christmas, my Scandinavian ancestors celebrated the Solstice. The men would drag home enormous logs and set them on fire, whereupon everybody would begin feasting. The festivities would last until the fire burned out, which could take up to 12 days. (Partridge in a Pear Tree, anyone?) I picture lots of high-cholesterol gorging and imbibing of spirits, and perhaps an uptick in the number of births the following autumn.

Those Norskies may have known how to party away the bleakest depths of winter, but I wonder if they shared and passed along the genetic predisposition toward depression and alcohol abuse that afflicts many folks of Scandinavian descent. After all, once the feasting was over, they still had months of deep winter darkness to endure. Cabin fever and claustrophobia must have been extreme, and the ability to hunker down in a state of suspended animation, almost like a bear in hibernation, would have been a valuable survival trait. Carried a few millennia forward into our frenetic modern times, that same ability might well translate into depression.

Story telling and music making must have played an essential role in boosting morale through those long-ago Scandinavian winters, and they’re every bit as important today. Speaking of which, I need to sign off now to get ready to usher for Judy Collins at the Troy Savings Bank Music Hall. I’ve heard her holiday show there before, and it’s a magical, uplifting experience – a perfect way to banish gloomy ruminations and celebrate the Solstice.

By the way, did you know there was a lunar eclipse this morning? Neither did I, until I began surfing the net for Solstice information. It was the first time since 1638 that a lunar eclipse fell on the Winter Solstice.

I’ll be back with more thoughts on the season. If you’re reading this, I’d love to hear from you, and I wish you a joyful, minimally stressful few days as we count down to Christmas.