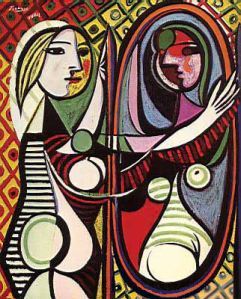 Facebook wants me to become friends with Julie Lomoe – they think I may know her. Evidently there are now two of me on Facebook, and my cyber self has come down with a case of acute Dissociative Identity Disorder. (That’s the official name for what used to be called Multiple Personality Disorder.) Is it because I neglected them for three weeks?

It started innocuously enough with an e-mail message from Facebook saying “Your 2 friends are waiting” and naming two people for me to confirm as friends. In hindsight, maybe I should have been suspicious – I thought they were friends already. But I clicked on the link, got a “Welcome Back” message, and moments later I was logged in on my account, or what I believed to be my account.

My photo was gone, though, replaced by that innocuous blue and white avatar silhouette. Even worse, I now had only three friends instead of two hundred – the two I’d just confirmed plus my husband. The site gave my Albany location and my married status, but the rest of the information was stripped.

Panicked, I ran downstairs. “Facebook has deleted me!” I told my husband. “Practically all my information has disappeared! Can they do that just because you’ve been AWOL?”

Calmly, he brought up his own Facebook account and typed my name into the search box. Thank God, there was my own account, safe and sound, complete with photo, but below it was a new account with that pesky avatar and pitiful three friends. To the best of my knowledge, there’s only one Julie Lomoe  – the last name is Norwegian, and the few Lomoes in the world are related.

I’d inadvertently created a Doppelganger with all my identifying features zapped away. Now, how to delete it? Checking the FB Help section, I learned how to deactivate or delete an account, but I was too frightened to try, because I wasn’t  sure which account I’d be disabling – maybe the imposter, but maybe the real me with all the background information I’d painstakingly entered over a year ago. I couldn’t bear to risk it. So that shadowy Julie Lomoe still floats ghostlike in cyberspace, stripped of all my hard-won life experience, but I’m hoping people will find their way to the true me.

Facebook has been trying to sabotage my married life as well. Another e-mail, allegedly from Facebook, contained a request from my husband asking that I verify that I’m in fact married to him and requesting permission to use my name on his account. I was surprised, because we’ve always kept our online identities separate and distinct for professional reasons. But I naively clicked OK, only to learn from him later that he’d never sent such a request and remained steadfastly opposed to such a revelation.

So the cyberspace gremlins are up to some nasty mischief on Facebook, or what poses as Facebook. I’m sure there are super-sophisticated explanations for what’s going on and why, but they’re probably far over my head. In the meantime, I’ve got a low-tech strategy: I won’t click on any links in e-mails that purport to be from Facebook. Instead I’ll log in the old-fashioned way, and hope that faceless Doppelganger fades away into the great beyond.

Have you had any similar problems with FB? Any ideas what caused them or any solutions? I’d love to hear from you.

Commenting on my “Slump-A-Dump” poem in the last post, Bob Sanchez praised my quasi-rap rhyming and characterized the piece as “healthy venting.” He got me thinking – how healthy is using your writing as a way of venting negative thoughts? Can it be counterproductive? I’m afraid that sometimes the answer is yes.

This morning I attempted a poem about the depression that’s been plaguing me since May. One passage reads:

I score my mood on scales of one through ten,

with one as suicidal, ten as manic, trying to uncover

conscious weather patterns I can manipulate at will

by choosing wholesome activities that bring me pleasure

or failing that, alleviate the pain. Writing works sometimes.

Writing didn’t work today. I woke up with my mood at three or four, but wallowing in negativity for the hour it took me took me to come up with a first draft left me feeling like a two. I wrote about the heat wave that’s forecast to roll in tomorrow,* and how that will give me a more valid excuse for misery than I’ve had during the recent stretch of gorgeous summer days. Did committing my thoughts to paper have a positive cathartic effect? On the contrary, I felt even worse.

M.E. Kemp commented that short stories are one option for barreling through a creative block. I began one a few days ago about a woman who decides to take to her bed for good. She converses with a shadowy archetype who encourages her in her resolution, and speculates about how high a dosage of her favorite sleeping pill, Lunesta, would prove fatal. Only the need to feed her cats prevents her from carrying out her plans – for the time being.

As I wrote about Gladys’s sweat-stained sheets and wondered how long it would take for her cats’ hungry nudges and love nips to morph into full-blown attack mode – would she have to die first? – I realized I didn’t want to go down the path my imagination was taking me. I couldn’t envision an epiphany for Gladys, something for her to live for, nor did I want to accompany her on a slow and painful death. After three pages, the story peters out, possibly for good.

On the other hand, healthy venting fueled the fire that inspired both my mystery novels. Mood Swing: The Bipolar Murders is about transcending the stigma of mental illness, and Eldercide explores the ethical dilemmas that arise as our allotted life spans grow ever longer. For me, writing has to spring from conviction, something I feel passionately about that I’ve absolutely got to get down on paper. I’m waiting impatiently for that subject to manifest itself.

*The heat wave is here, threatening to break all kinds of records in upstate New York, and sure enough, the external excuse for misery helps me feel a little better about myself. I wrote this post a few days ago but felt it was too downbeat to publish unless I could come up with a more positive ending. But what the heck – I need to get something up here regardless. Maybe you can come up with some more upbeat comments to help cheer me up.